We get commissions for purchases made through links in this post. Learn more.

What Is A DI Box And Do You Need One?

Ever wondered what is a DI Box?

And whether if you should add this equipment to your home studio shopping list?

Don’t worry because you will in this post learn exactly how this piece of equipment works.

What Is A DI Box?

A DI Box is essential for musicians of all types. Anyone in a band needs one. And here’s why.

DI stands for “direct injection”, and it’s one of the most useful pieces of musical equipment in existence.

Almost every stage or studio has one, and it’s hard to find a modern interface that doesn’t have a built-in DI Box.

It all has to do with balance. Knowing how balanced and unbalanced cables work will help understand why a DI Box is so necessary.

First, let’s look at the unbalanced cables. They’re the most common found on stages, and it’s what a typical electric guitar uses, though it also has a wide variety of other applications.

It’s also known as a “TS Cable” because of the connectors it has. These two letters represent “Tip” and “Sleeve”.

There’s a black marking on the cable for the sleeve along with the tip, which matches two wires, a ground and a signal, that transports the sound passing through the cable.

Now, a balanced cable, commonly known in studios as a “TRS Cable”, stands for “Tip”, “Ring”, and “Sleeve”.

The balanced cable has two black markings under the tip, with three wires transporting the signal instead of the two found in the TS cable. Two of the wires are referred to as cold or hot, while the third one is the ground.

The difference between these two cables is simple. With the unbalanced cable, which has a ground wire and the other cable carrying the signal, there’s a greater chance that you’ll get interference, or noise, as the cable acts like an antenna.

Though the ground wire in a TS cable will reduce noise to a certain extent, you won’t find an unbalanced cable longer than twenty feet, as beyond that length the noise level becomes too much.

With the TRS cable’s cold and hot signal cables, noise gets cancelled more efficiently. Both cables send signals, but one has a reversed polarity. When you reverse polarity on one and keep the other cable normal, you get silence. The signals cancel each other!

This is, incidentally, why it’s so difficult to record in stereo.

Electrical musical instruments don’t normally work with silence, so once this signal reaches the end of the cable, it reverses the signal back to its initial alignment.

It flips once it reaches the end, resulting in strong signals reaching your audio device without noise. Basically, balanced cables allow you to play your electric instruments or other electrical music equipment without noise.

What Does A DI Box Do?

The DI box is remarkably simple, a device that creates possibilities when playing music in a studio or on stage.

To put it simply, the DI box transforms high-Z or high impedance signals into low-Z or low impedance microphone signals.

This gets down to the effective resistance of these Z signals, which act just like an electric current going through the cable, which is what transfers the sound.

But why would we want this?

Passive guitar pickups emit a high-Z signal, while the gear receiving the signal, such as microphone pre-amps and mixing desks, requires a low-Z signal. For both live shows and studio recording, these signals need to be low-Z, and this is where the DI box comes it.

The DI Box ensures that you get the right signal going to your PA system for live performances or for recording.

It allows you to split signals as either “Wet” or “Dry”, sending them to different places, which is why it’s so very useful for stage performances and in the studio.

It allows you to send a balanced output to the mixing desk while the unprocessed signal continues on to the amplifier.

This makes it possible to record both non-effected and effected signals, creating the ability to add extra texture to music while keeping the original signal for re-amping and adding sounds later in the editing process.

Another benefit the DI box gives musicians and recording artists is the longer distances it allows sounds to travel, without the excess noise.

That’s what makes it so brilliant for use in studio recordings, where massive cables snake throughout the recording room to each piece of audio equipment.

Essentially there are just two types of DI Box, passive or active. They both have their uses, depending on what you want to do. Primarily, the difference is between one being powered – the active one – and the other – the passive one – not being powered.

There’s more to this, of course.

And to understand the concept, you need to be counterintuitive.

They utilize active electronic buffer circuits, which boosts the signals and make these instruments sound better. The tinny and listless sound an unamplified guitar makes should be reason enough to understand their usefulness. 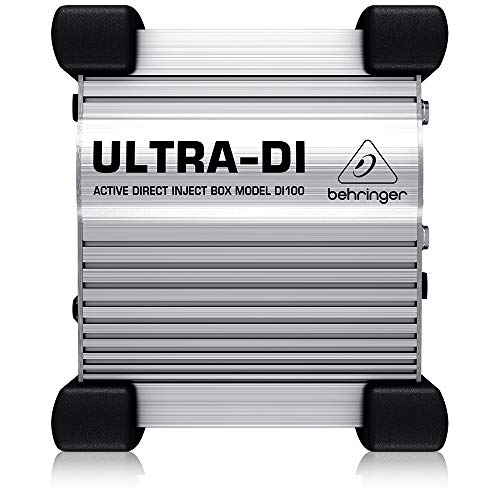 Whereas passive DI boxes, work best with the following instruments

Passive DI boxes give you very little or no distortion, as it’s got more headroom. There’s enough gain reduction to keep the signal from getting too loud.

Yet because the above instruments tend to already have preamps embedded with “hot” signals in the output, you won’t need the amplification active DI boxes provides. 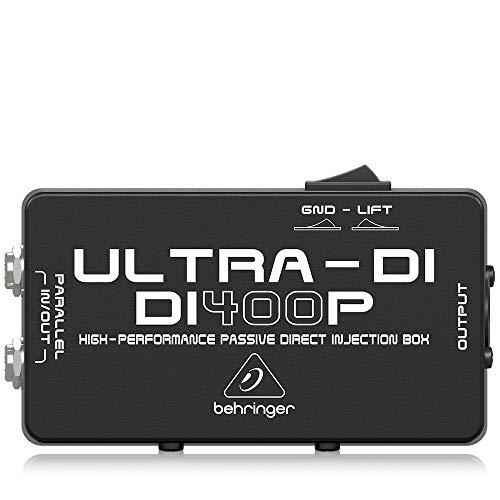 Should You Get A DI Box?

There are a number of different uses for both passive and active DI boxes for both studio musicians and band stage shows.

These are the main areas where the DI box plays a role:

With stage shows, passive DI boxes are the most common, as seasoned veterans of music gigs know. Finding a free power socket on-stage before a show can be a challenge, and as passive DI boxes don’t require them, they tend to be more useful in these cases.

The passive DI box transformers are also highly resistant to the incessant hum that occurs when direct electrical connections exist between inputs and outputs. This provides for noise-free sound, which will make any live band sound better.

With bass guitars, DI boxes are often used to mix their sound with a microphone signal recorded from the amplifier. This is a common recording technique, which is often used on stage. The deep bass sound pairs well with the unaltered direct sound to add power to any recording.

A bass connected to a DI box results in a clear, defined tone. That’s what you want for the recording process. It also keeps the band’s songs from sounding too cluttered, which happens in many live venues, creating a clear rather than muddy tone.

For the studio, the passive DI boxes sound more natural, their saturation creating pleasant sound effects when played hard. The active DI boxes, on the other hand, result in a sound that sounds more digital, and which can create a waveform distortion.

Both passive and active DI boxes are necessary for any modern studio. As they deal with a multitude of different instruments with high and low impedance, having both is necessary for making the best recordings.

When recording a DI box signal, the recording engineer can re-amplify the signal to use for a later date. Capturing the original DI signal during a performance, musical engineers can then send it to another amplifier to create special effects.

In this way, a guitarist can save time finding the perfect tone for his or her instrument. It lets musicians get in a good take before tweaking for tone during the session.

And that’s why DI boxes are so essential. Whether recording in the studio or looking for the best sound, modern musical engineers need them to perfect the music, whether it be from a live performance or studio recording.

These boxes are a must with anyone wanting to make high-quality recordings, and their versatility ensures a banging live show.

Ableton vs Garageband – A Comparison